The Kitchen Table helps connect elected officials and the public in joint projects at nearly any scale (state, regional, local and even individual) through innovative engagement activities, both online and in person.

The Kitchen Table is intended to address multiple problems in public life:

The model was initially used in Oregon when Oregon’s Kitchen Table was founded in 2010 as a program of the National Policy Consensus Center at Portland State University by a group of non-profit, community leaders, and former elected officials in order to create a permanent civic infrastructure through which Oregonians can access a suite of different opportunities for civic engagement. Each Oregon’s Kitchen Table project – no matter the activity - includes organizing and outreach components to generate participation from hundreds to thousands of Oregonians.

In Oregon, the model is currently made up of 3 components: consultations with the public on important public issues and decisions; civic crowdfunding for projects that benefit Oregon communities; and Oregonian-to-Oregonian microlending to help ensure small businesses in Oregon achieve economic self-sufficiency.  Not every version of the model requires all 3 components and we envision Oregon and other states adding in new ways of engaging at different times.  We can’t predict what other tools will emerge, but the Kitchen Table – wherever it’s being set – has the ability to include multiple tools for communities and their leaders to connect.

Here’s how it’s working in Oregon:

Public consultations – with Oregon’s Kitchen Table staff, community members, and expert public opinion researchers co-designing instruments and outreach strategies – provide an opportunity for all Oregonian to spend a few minutes (either online or through a combination of paper surveys / in-person events) giving their opinions on a particular policy question or issue.  We have found that the technique of creating situations in which citizens can replicate the tradeoffs policymakers are faced with creates a deeper understanding of the issues, more appreciation by citizens for the difficulties inherent in policy tradeoffs, and more respect for the input itself from decision-makers.

In 2014, Oregon’s Kitchen Table joined the Oregon Business Council and other organizations committed to creating a robust, thriving economy by removing barriers to overcoming poverty and empowering citizens to maximize their potential. One method has been to find ways to increase access to financing for small businesses who need small loans to expand their business and ensure economic self-sufficiency.  Traditional financing options typically do not administer those critical small loans. Oregon’s Kitchen Table has partnered with Community Sourced Capitol, a Northwest non-profit providing microloans to entrepreneurs in Oregon.  We are implementing a strategy using the Oregon’s Kitchen table online platform to connect more Oregonians interested in helping the state achieve more prosperity with Oregonians in their own community running small businesses. 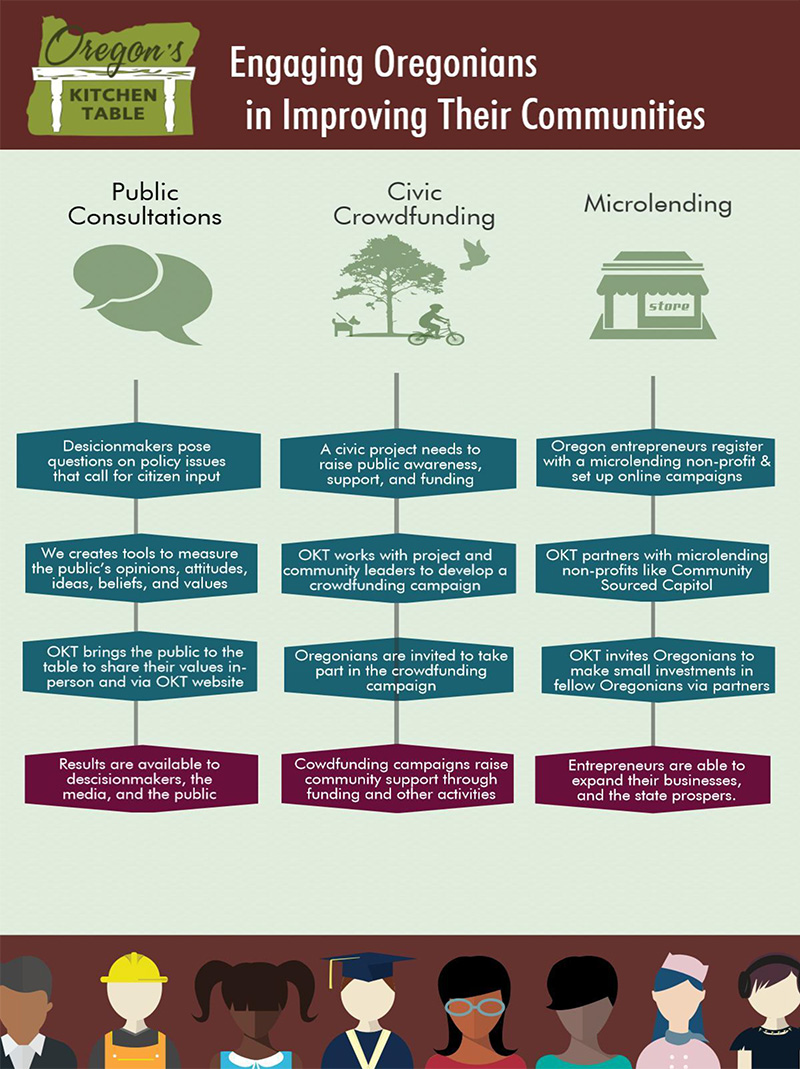 In 2015, Oregon's Kitchen Table was selected as a finalist for Roy and Lila Ash Innovations in Public Engagement in Government Award from the Harvard Kennedy School's Ash Center for Democratic Governance and Innovation.  The award program recognizes government-led innovations that demonstrate enhanced public engagement and participation in the governance of towns, cities, states, and the nation. These initiatives represent the committed efforts of city, state, and federal governments to engage with the communities and citizens they represent and were selected by a cohort of policy experts, researchers, and practitioners.   As one of the four finalists, Kitchen Table Democracy is working to replicate the Kitchen Table model in other jurisdictions.